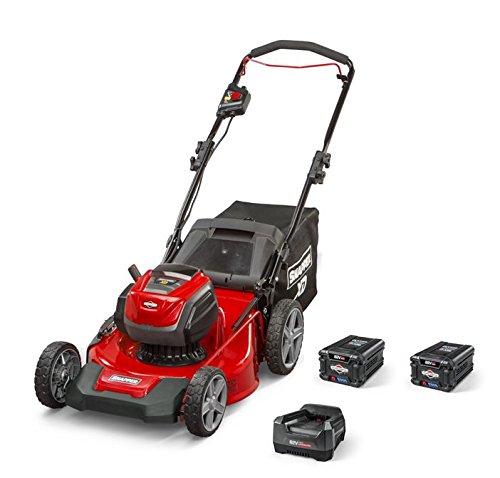 Up to 90 minutes run time

Today we are going to take a look at the Snapper XD 82V Electric Cordless Lawnmower a powerful convenient cordless lawnmower that is efficient, easy to use, and can handle all types of lawns.

In this review we will cover the basic spec, some of the highlighted features, and talk about some alternative options if it’s not your cup of tea.

The Snapper XD 82v Electric Cordless Lawnmower is a great option to make the transition for a gas mower to an electric mower.

It is very powerful, has lots of adjustability options, and has some great features that make it super easy to use, like the push-button ignition and self-propel mechanism.

It also charges very quickly and lets you attach an extra battery that changes as soon as the first one runs out.

The only thing we would take points off for is the relatively short battery life, but this can be improved upon by buying the optional 4 Ah or 5 Ah batteries.

Should You Buy It?

If you love the power of a gas mower, and this has turned you off battery-powered models in the past then the Snapper 82V cordless mower may be exactly what you are looking for.

Disclosure: It is important you understand that we may receive commissions when you click our links and make purchases. However, this does not impact our reviews and comparisons. All opinions are our own. We pride ourselves on keeping our articles fair and balanced. For more info see our disclosure statement.

When they first hit the market some 20 or so years ago, people were initially very skeptical about electric lawnmowers, specifically regarding their battery life and durability. However, advances in battery and electric motor technology have allowed manufacturers make huge leaps in what a cordless mower is capable of.

The Snapper XD 82V is one such lawnmower that has taken the battery powered mower segment to new heights.

This lightweight 21” electric lawnmower features a powerful 1200 watt motor powered by 2 equally beefy 82 volt 2.0Ah battery that can charge to full capacity in just an hour. Stainless steel blades and a smart loading sensor technology ensure a good cut that changes to meet the demands of the cutting blade. A push-button and single lever with 7 different height positions only add to the ease of use.

One defining feature of the Snapper is the one-push button ignition system that lets you start it up without yanking on an annoying cord. The lawnmower also lets you dispose of clippings as mulch, retrieved from a bag, or discharged from the side. Another neat feature is the self-propel system that makes it much easier to wheel around.

The XD 82V electric cordless lawnmower is another stud in the belt of esteemed hardware manufacturer Snapper, a Wisconsin-based company that has a storied 100-year history of crafting professional lawn-care and snow-removal equipment.

Things To Consider Before Buying An Electric Lawnmower

Some people might still be skeptical about electric mowers, so here are some benefits of electric mowers over gas mowers and some considerations to think about.

First off, electric mowers don’t need any gas to run. This might sound obvious, but few realize just how good of a benefit this is.

First off, you won’t have to pay for gas to keep her running, which saves you money in the long run.

Second, the EPA estimates that a new gas-powered lawnmower produces as much volatile emissions in one hour as 11 cars being driven for one hour do.

So an electric lawnmower is much more eco-conscious.

Much Lighter Than Gas Models

Lastly, electric lawnmowers tend to be much lighter than gas motors, because they are not full of liquid while in operation, and they have fewer heavy-duty parts.

Electric lawnmowers also tend to be made out of lighter composite materials unlike the metals of gas-powered lawnmowers.

One problem with electric motors is that you need to find the correct sized battery with the right voltage and amperes.

Gas-powered lawn mowers can be run on any normal unleaded gasoline.

Also, electric lawnmowers tend to have a smaller deck width than gas-powered ones. However, once you factor in how more efficient electric lawn mowers are overall, these issues are not that big of a deal.

The deck of a lawnmower refers to the undercarriage of the lawnmower. The Snapper has an interesting (if somewhat common these days) 3-in-1 deck design that lets you choose how to dispose of lawn clippings.

You can connect it to a bag to collect clippings to discard later, set it on mulch mode and create a mulchy base for your yard, or keep it simple and discharge the clipping through the side. Most lawnmowers only give you one or two deck options so it’s nice to see something that gives you all three.

The side discharge and bag modes work extremely well, but we will say that the mulch setting works but it’s nothing special.

Many full-size lawnmowers are heavy and pretty tough to move. The Snapper XD features a nifty self-propel mechanism that assists you when pushing it around. Just depress the self-propel bar near the handle, and the motor applies some juice to the back wheels to keep them turning. This makes it much easier to push along your yard while mowing, and push it around when it’s not in use.

We should warn you though, the self-propel mechanism has some kick so it can be hard to manage if you’re not expecting it. Make sure you are firmly holding the lawnmower before you activate it or you may have a runaway lawnmower on your hands.

Lawnmowers are notorious for being one of the heavier pieces of lawn care equipment out there, so it’s nice to see that the Snapper shaved some pounds off that traditional design.

The entire Snapper weighs just a tad over 90 lbs, about 30 lbs less than most power lawn mowers with motors. The self-propel mechanism makes it feel even lighter when pushing it around.

The low weight and self-propel mechanism mean that it can be used by anyone, even older folks who may not be as spry as they were in their youth.

Most older electric motors were brushed motors, meaning that they contain a small brush that flips the stators that create the magnetic field powering the motor. Brushless motors, in contrast, use an onboard computer to change the orientation of the fields to power the motor. Brushless motors have an efficiency anywhere between 85%-90% whereas brushed motor only operates at about 75%-80% efficiency.

The high power brushless motor of the Snapper can easily handle 3”-6” tall grass without breaking a sweat, though it is noticeably louder than some electric motors out there.

To be honest, this is probably our favorite feature of the Snapper. The load sensing tech detects how thick the grass is and adjusts the power of the blades to follow suit. This saves on energy and makes the battery last longer as it’s not exerting its full effort all the time. It also makes it easier to mow in general because the blade power gets set to exactly how much you need.

We also like how it gives you the option to set the blades at 7 different lengths depending on the length of your lawn. If you want your lawn to be extra short, set it at the lowest blade setting, though it may be harder to push if your lawn is long and you’re trying to cut it as low as possible. We recommend going over the lawn once on a higher setting then switching to the lower level.

If you want to learn more about cordless tool batteries, then we have an extensive guide here.

Here is one category where the Snapper falls somewhat short. It can only get about an hour of full runtime off a fully charged 2 Ah battery, though you can attach two at the same time and it will switch when one runs out.

The 2 Ah batteries should give you enough juice to cover about 2,000 sq. feet of lawn. The 4 Ah and 5 Ah batteries give you more run time, but you cannot attach two of those at the same time.

Those who have older gas-powered lawnmowers will remember having to continually pull a cord to start it up. Not so with the Snapper.

The Snapper has a wonderful single push-button ignition system that makes it very easy to start. Just press the button once and you’ll hear it roar to life. No more wasting time and effort yanking on a long cord. One push and you’ll be good to go.

If you find that the Snapper XD is just not for you, here are some similar electric lawnmower products you can check out. These lawnmowers have similar features to the Snapper and occupy a similar price point. 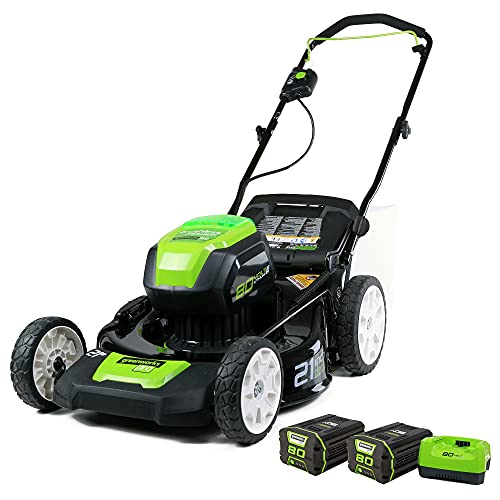 The Greenworks has a strong 80V battery and an efficient brushless motor that can put out the same power as a 160cc gas engine.

Like the Snapper, the Greenworks comes with two 2.0 Ah batteries that can be double loaded so it switches to the other when one runs out. It also has smart load technology that modulates the blade power, a 3-in-1 deck setup, and a push-button start that gets rid of the need for a cord.

The Greenworks also offers a stronger 4 Ah battery, but there is no 5 Ah battery option like the Snapper has.

It’s also a favorite of ours and made our best cordless lawn mower list. You can read our Greenworks 80v mower review here. 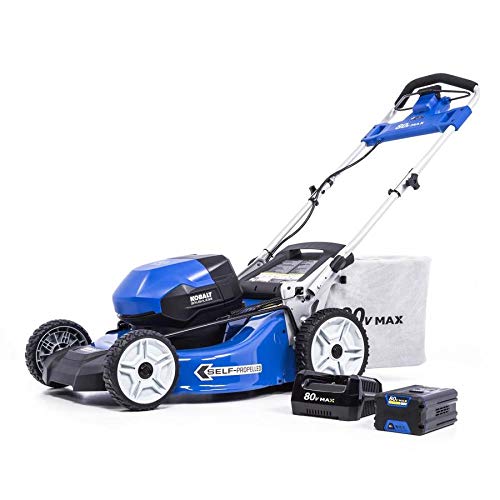 Another solid electric lawnmower option is the KT Kobalt Electric Lawnmower from KT. The lawnmower has an 80V battery, self-propelled rear-wheel drive, and variable speed control for easy handling.

Like the Snapper, it has an autoload sensor that changes blade speed to match the need and 7 different blade adjustment levels. It also has a nifty 3-in-1 deck design that lets you choose how to dispose of lawn clippings.

The KT also has a more powerful 6 Ah battery that gives longer run times than the Snapper and Greenworks standard 2 Ah. batteries. However, the KYT does take a bit longer to charge, somewhere in the range of an hour and a half to two hours.

The Snapper XD 82v Electric Cordless Lawnmower is a great option to make the transition for a gas mower to an electric mower.

It is very powerful, has lots of adjustability options, and has some great features that make it super easy to use, like the push-button ignition and self-propel mechanism.

It also charges very quickly and lets you attach an extra battery that changes as soon as the first one runs out.

The only thing we would take points off for is the relatively short battery life, but this can be improved upon by buying the optional 4 Ah or 5 Ah batteries.

Author
Aaron Green
Aaron is the founder of and Essential Home and Garden. He likes to spend his spare time with his family, and doing DIY projects in the home and garden.