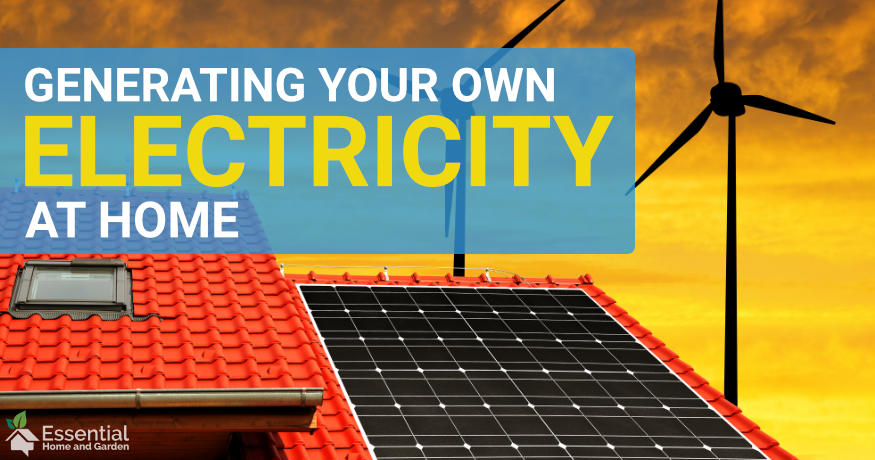 Have your home’s energy costs been increasing lately? If they are, you may now be looking for a fresh opportunity to save some money on one of your home’s most important utilities.

“But how much will generating my own electricity cost?”, you may be asking. Interestingly enough, at-home electrical generation is becoming more accessible and affordable than ever before. So, now is a great time to switch to a greener, cheaper source of electricity.

This guide will help you do that by outlining the most popular forms of at-home electrical generation. In this guide, we’ve also highlighted the most important factors you’ll need to account for before making the big switch.

Before you start researching which alternative electricity production sources are available and viable in your area, take some time to see what you can save by switching. Specifically, you should take some time to learn if your state or the federal government has active incentives to help make switching more affordable.

In many cases, your state government and the federal government have a vested interest in helping encourage citizens like you switch to a green energy source. As such, they may offer a rebate on your hardware’s installation cost or offer a tax credit that you can cash in at a later date. Either way, these incentive programs can help cut out a significant chunk of your switching costs.

How To Find Incentives

If this is your first time considering an alternative energy generation method, your search for these incentives should begin on DSIRE’s homepage. There, the Clean Energy Technology Center at North Carolina State University has put together an interactive map that allows you to succinctly see all active alternative energy incentives for your state.

For example, if you were an Illinois resident, this website would tell you that ComEd is offering new home builders financial incentives to include alternative energy generation technology in their building plans. So, if you fit that description, you’d be able to follow this website’s user-friendly interface to learn more about applying for that incentive.

Meanwhile, if you’re looking for financial incentives from the federal government, consider asking a tax professional about currently active programs of this nature. They can help you plan out which tax credits you’ll claim based upon the recently revised tax code.

Be sure to use all of the information below to make an informed decision about which of the following methods fits your lifestyle and your budget!

For many homeowners, solar power is at the top of their alternative energy list. After all, solar power is one of the most accessible and visible at-home electricity generation methods available across the country today. Better yet, according to Alex Kruglov from the A1 Solar Store, it is also one of the most versatile options given that it can be installed virtually anywhere.

Chances are, you’ve seen the type of solar panels folks install on the top of their home. There are also far smaller panels available, too, many of which can power just a single appliance or be placed on any section of your home (including the roof).

Solar is certainly one of the most affordable alternative energy sources, not least because they are eligible for the most government subsidy programs overall. After installation, they don’t require much upkeep cost at all, either. Other than changing the outward appearance of part of your home’s structure, these types of panels come with few drawbacks overall.

Regardless of how big they are, all solar panels tend to work the same way. In essence, these systems are:

Next up are wind turbines, which you may have seen if you live in the Midwest or Great Plains regions of the US. There, these massive windmills take advantage of the relatively flat nature of these regions to convert the wind’s force into energy.

While scale may feel like an issue with this type of at-home energy generation source, you’ll be pleased to know that consumer-grade turbines are becoming more common. These come with considerable up-front costs, but can pay for themselves over time due to the consistency of their output. They only come with modest upkeep costs as well.

Wind turbines are also an ideal choice for folks looking to set up a hybrid energy production system in and around their home. These systems can combine the forces of a turbine, a diesel generator, solar panels, and more to create a reliable electrical supply that is also off the grid. As a result, turbines see a lot of use in rural or mountainous locations.

Get a Quote From An Electrician

Depending on where you live in the US, geothermal power may also be a viable option for supplementing or even replacing your home’s current energy intake. This source of electricity is less well known but holds the potential for considerable expansion in the near future.

As noted, geothermal home energy production is currently limited to areas where so-called “heat pockets” are readily accessible. Though other methods exist for taping into geothermal energy, there are some on-going concerns that this will lead to more frequent earthquakes.\

Due to its limited availability at this time, geothermal energy tends to be pretty expensive to install. At the same time, there are not many government incentives to offset the cost of setting up its necessary hardware. However, prospective users still may check with their local regulators to see if their land could productively put geothermal power to use.

In essence, geothermal energy taps into the Earth’s natural convection heating in order to power a personalized generator. This is accomplished through the following process:

Hydroelectric energy generation is another method many citizens are readily familiar with. After all, if you live in certain parts of the western and southwestern US, you already receive your electricity from hydroelectric generators at sites like the Hoover Dam.

Of course, the scale of those generators is far greater than a single home needs or can afford. That’s why micro hydroelectric power stations have been created to serve the needs of individual homeowners. In fact, these systems can be installed on almost any property which has running water flowing through it.

Depending on the natural resources available to you, micro hydroelectric power generation can be costly up-front. However, these systems are remarkably resilient over time and don’t require much upkeep over time. As such, they are typically only used to power homes that have an excessive need for electricity (such as those lying on a farming property).

How a Micro Hydroelectric System Works

There are several different types of micro systems for generating hydroelectric energy. In their most basic form, they operate using the following method:

One other up-and-coming source for at-home electricity generation involves what is known as “biomass.” While its precise composition will vary, biomass is any leftover plant, wood, or animal waste that accumulates through industrial processes. This material can then be burned in order to heat water, which in turn produces electricity by boiling and turning a steam turbine.

Biomass’ uses have been limited up to this point primarily because there is not an established system for getting it to consumers. However, it is still a useful alternative for homeowners who are living off the grid and want to supplement their other forms of alternative energy production.

As far as costs are concerned, biomass burning is fairly cheap to initiate. Once the hardware is built, it only costs as much as the fuel to operate. So, if it is viable in your area, this can be a cheap way to replace even a fraction of your home’s electricity usage.

Here are just a few more considerations that you should keep in mind when evaluating which kind of at-home electricity generation system you intend to install. If you are planning to work with a professional contractor to install your system (which is recommended), these are topics that you should bring up prior to installation:

Most forms of alternative electricity generation derive from non-consistent sources. In other words, there may not always be enough sunlight or wind to meet your home’s energy demand. This is where a specialize battery system comes into play.

These batteries can be expensive, as you might expect. However, in order to get the most out of your generated electricity you should consider allowing for them in your cost estimates.

Depending on where you live in the country, you may be able to mix and match several at-home electrical generation sources. This will result in a more consistent reliance on these alternative sources, even when conditions are not favorable for one or the other.

Naturally, following this route will raise your up-front and long-term costs associated with each individual system. But, over time, these costs should remain stable, leading to savings compared to the cost of traditional electricity.

As you can see, you have a lot of options in front of you when it comes to changing your home’s primary method of electricity generation. Whether you’re switching to save money or move towards a greener practice, each of the methods mentioned above will help you achieve your goal to a greater or lesser degree.

If you still have questions about how to generate your own electricity at home, you’re not alone. Feel free to ask your questions in the comment section below and you’ll surely get a response from other users. Meanwhile, if you have experiences using any of these energy sources, please share them so everyone can learn from you!