You might associate succulents with balmy climes, tumbleweed, and arid desert landscapes,  so you might be surprised to discover that some succulents thrive in cooler climates. There’s a surprisingly wide array of hardy succulents that can survive and thrive in cold weather, so there’s no reason why you can’t enjoy the exotic, almost alien attraction of these tiny-leaved plants in any garden, regardless of your native climate.

Cold hardy succulents can survive frost and snow without damage to the plant – pretty impressive for a plant with such a significant water content.

Disclosure: As an Amazon Associate I earn from qualifying purchases. However, this does not impact our reviews and comparisons. All opinions are our own we pride ourselves on keeping our articles fair and balanced. For more info see our disclosure statement.

We’ve compiled a list of winter-hardy succulents that can survive in warmer climates, but they’re far more suited to areas that don’t enjoy tropical heat all year round. Our list is ideal for anyone living in the cooler regions of the planet, such as the chilly mountain ranges of Canada, the schizophrenically temperate UK, and the frequently frosty Scandinavian zones.

The succulents featured in this article mainly fall into the xeriscape category of growers – plants that require little to no additional irrigation other than that which the natural environment provides.

There are two principal varieties of succulents that will tolerate the temperature when it drops down to freezing – Semperviviums and Stonecrop Sedums. Most of these varieties will handle temperatures as low as -20ºF and won’t mind the occasional hot spell!

Sedum Spectabile “Autumn Joy” is a xeriscape plant that grows natively in North America, but is happy when exposed to cold conditions in other parts of the world. The leaves are lime green, with a prominent central vein. The tiny flowers contrast beautifully in shades of pink against the vivid foliage. This flowering succulent produces tiny flowers that grow in tight bunches – a little like loose florets of broccoli.

Natively, the Autumn Joy grows happily alongside other garden perennials, such as Rudbeckia, and looks particularly striking amongst ornamental grasses.

The climate dictates the shade of the flowers, which range from a delicate pale pink, through to the deepest hue of salmon.

If you are interested in growing your own Autum Joy, you can see Amazon’s selection here.

Sempervivum, perhaps, has been given a bad rap in the past – associated mostly with the type of garden that your grandma might have enjoyed. However, there’s been a real renaissance of interest in these cute little cauliflower-like hens and chicks, so called because of the spreading behavior of this very pretty, exotic plant.

They add a great texture to any flower bed, and have the slightly alien and mathematical look of organic fractals. They grow in a wide variety of sizes, and the same plant can spread profusely with totally unique looking blooms that provide attractive, textural ground cover. They sit exceptionally comfortably in rockeries or present real textural interest on a green roof.

There is a range of Sempervivum available on Amazon.

Sedum spurium “Dragon’s Blood” is a real staple of the rockery garden. It copes extremely well in cold weather and has a magnetic attraction to butterflies and other insects that pollinate; the Dragon’s Blood is an excellent addition to a garden full of fruit plants and trees.

These tough, robust plants spread widely, producing beautifully-formed ornate flowers that are characteristically tiny. Sedum spurium requires no intervention from the gardener and copes well in full sun, in well-drained soil. In fact, it prefers poor, gravelly earth, a little like an orchid. For a xeriscape garden, the Dragon’s Blood brings a stunning spread of pink blossom that brightens up a dry, forgotten corner of the garden.

Want a little Dragon’s Blood to brighten your day? Get them here.

Jovibarba has the succulence and spikiness of a cactus, but with the resemblance of the beautiful bulb produced by a globe artichoke. They’re thoroughly robust and survive in extreme cold, during extended drought, through periods of blazing heat, and in poor soil conditions.

They won’t cope with waterlogged soil, however – as long as their chosen spot drains quickly, the jolly Jovibarba will set up camp and stay for the long stretch.

What’s particularly fascinating about the Jovibarba is that it will find its own space if it doesn’t enjoy the spot you give it – it will produce a clutch of chicks that spread and roll away from the host plant in an effort to form a new colony in more hospital soil.

There’s a wide range of genetic variety with this particular cold hardy succulent – it interbreeds willingly, adding a beautiful array of greens and pinks to wherever they decide to settle.

If you are after an extremely hardy succulent, then take a look at the selection on Amazon now.

Sedum telephium “Purple Emperor” has more than a fleeting resemblance to purple-sprouting broccoli. I wouldn’t eat it, though, however tempting it might look. The flower heads grow in tight bunches of tiny buds that spring into cerise flower when the time is right.

The Purple Emperor is often chosen for its interesting color – a lovely contrast to the typically green-leafed type of succulent family. This is a tall border stonecrop, with majestic blooms that lift a darkened posterior edge of a flower bed, making plenty of space for smaller plants to comfortably find a home up front.

Once again, you can find these hard to kill plants on Amazon.

Jovibarba heuffelii is similar in appearance to the more conventional Jovibarba we’ve already featured but has a more open globe with slightly more prominent spikes at the tip of each leaf. The colors are more attractive than that of its distant cousin, offering a broad spectrum of pale greens, yellows, bronzes, and pinks.

This is one of those plants that is literally impossible to kill; as long as it’s not forced to sit in soggy ground.

This super-hardy specimen will grow during the harshest extremes of weather. It will appear to shrink down to almost nothing when faced with drought but will re-inflate perfectly once it’s had its first drink of the season. The challenge is in trying to kill this super-hardy succulent. Ideal for literally any garden, and particularly suitable for areas that experience long, hard winters.

If you are are the sort of person who seems to have a “black thumb”, then try this. Available here. 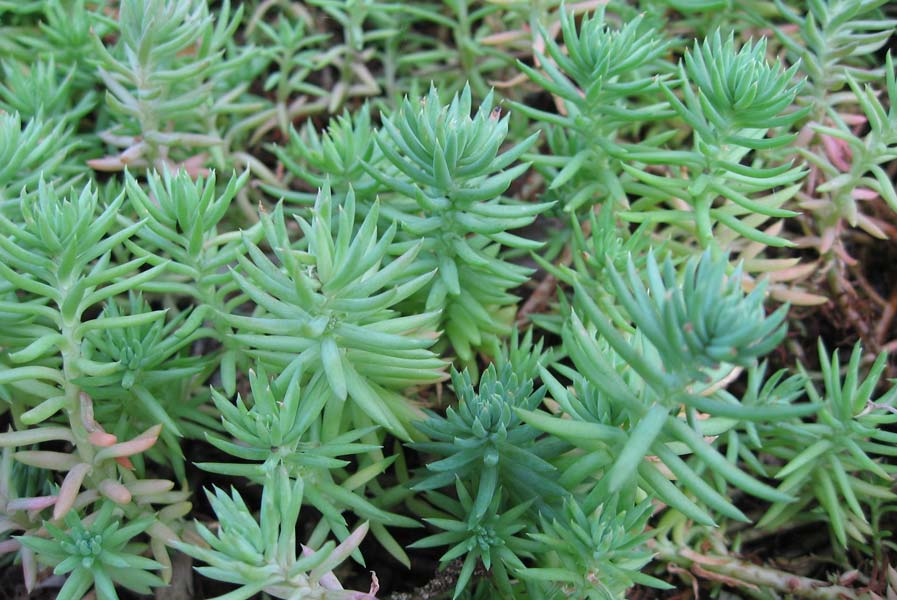 Sedum reflexum “Angelina” has the furry look of a fern, with profuse green stems that produce almost sponge-like fronds that transform, chameleon-like, from pale green to golden hues throughout the year.

A keen spreader, the Angelina provides a lovely break from the deeper greens and greys often associated with xeriscape gardening. It will flower, but reluctantly; so don’t expect a regular burst of bloom with this particular succulent.

It will contribute a beautiful bronze aura to your garden during cold snaps, transforming itself through to golden orange or lime green when warmer.

Capable of enduring extremes of temperature, with a color response to match each one, this is one of those succulents that provide excellent floor coverage with a surprising array of continually changing tonal hues.

Looking to grow a garden indoors during winter? Check out our guide on an amazing product called the Aerogarden.

The Orostachys is, perhaps, one of the most unusual-looking of all the succulents – resembling a spikey, half-globe crown that stretches up from stony ground.

This can be a tricky plant to add to an established garden as its much pickier than the other succulents featured in this article.

It can be a slow grower if the position isn’t exactly right. However, once you’ve found the right spot, this extremely hardy succulent will survive the cold and drought, and won’t mind the occasional covering of snow.

So, there you have it – eight wonderful, hardy succulents that you can introduce to your garden and leave them to nature.

One of the most attractive aspects of establishing these hardy plants to your garden is the fact that they require barely any attention and will flourish regardless; painting your garden in pretty splashes of color whatever the weather.

Author
Aaron Green
Aaron is the founder of and Essential Home and Garden. He likes to spend his spare time with his family, and doing DIY projects in the home and garden.