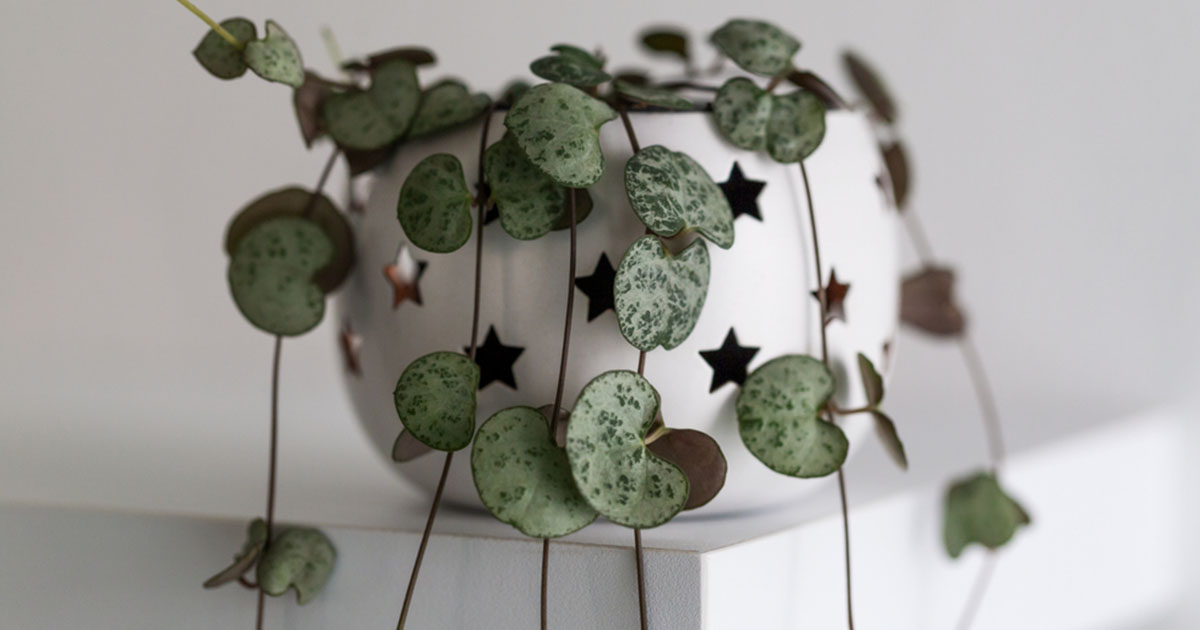 If you are looking for a pretty, easy-to-care-for plant — a perfect gift for your sweetheart — you’ll fall in love with the variegated string of hearts. Its tiny, heart-shaped leaves are mottled sage-green and silver. The leaves of the variegated variety of these plants are edged in an eye-catching pink. The string of hearts vines are attractive enough to keep for their foliage alone, but as a bonus, they produce quirky pink flowers that resemble flamingoes.

String of hearts is a perfect plant for creating vertical interest, whether as a houseplant or in the garden. It hangs like ivy, with pairs of tiny leaves clustered on trailing vines. It produces tubers (aerial roots that resemble little beads) that grow along the stem. These are the source of another of the succulent’s nicknames, rosary vine.

Indoors you can grow your string of hearts on a ledge or in a hanging pot, so the vines trail in the air. Outdoors, in warm climates, it works well trailing down a rock wall, for example. However, it works well as a houseplant, especially because it does not require direct sunlight. Its versatility and pretty foliage have made it an extremely popular plant.

Quick Guide to String of Hearts

String of hearts, like many succulents, likes a lot of light but not a lot of strong direct light.

Outdoors, plant it in a bright area with dappled shade. Another good option is to have it in a location that gets morning sun and afternoon shade.

Indoors, grow it in a north or east-facing window, or a few feet away from south or west-facing window. If you aren’t sure, pay attention to the leaves. If it gets sunburned move it to an area where the light is less intense.

Give it more light if the vines grow spindly (with long gaps between leaf pairs) or if the variegation fades so that the coloration of the leaves becomes a more homogenous pale green. When it gets enough light, the green will darken and the variegation will become more dramatic.

String of hearts is native to South Africa, Zimbabwe, and Mozambique. It is not cold hardy. It prefers temperatures ranging from low 80s to 60s.

A healthy outdoor string of hearts plant may survive if it occasionally dips to around freezing overnight, but it will not tolerate extended periods of sub-freezing temperatures. They are suitable for outdoor planting in USDA zone 10 or warmer.

Conveniently for gardeners in those zones, string of hearts is fairly drought tolerant. Standard household humidity levels are fine; it does not need extra humidity.

String of hearts makes a great house plant because it is non-toxic to pets and people. In South Africa, they ate the stems and tubers. It was even used in traditional Zulu medicine. Wild animals, ranging from porcupine to rats to bugs, are also known to eat it.

String of hearts grows spring through fall. They are dormant in winter.

String of hearts plants are dainty, but the vines can grow as long as 3-6 feet.

The plant’s purplish-pink flowers are unusual in shape. They are bulbous with a curved neck, so they bear an odd resemblance to a flamingo. The tip of the flower consists of dark, slightly hairy lobes, which, to extend the flamingo metaphor, resemble a beak.

Growing the Variegated String of Hearts

In South Africa, where it is indigenous, string of hearts is typically found growing on rocky ledges, in cracks where a thin pocket of soil has accumulated. It tends to grow in loam (soil that is balanced between clay, sand, and organic material), or rich soil that also contains gravel. It often grows among other bushes that provide partial shade and humidity.

If planting outside (in USDA zone 10+), a rock garden is a good place for string of hearts, or trailing down a rock wall. If you live in a colder climate, you can plant string of hearts in a pot and leave it outside during the summer — perhaps hanging from a hook on a partially shaded porch — and then bring it inside during the cooler months.

Indoors, make sure your string of hearts gets as much sunlight as possible without sunburning. Lots of bright indirect light and perhaps a few hours of direct morning light is ideal.

Like all succulents, the string of hearts benefits from excellent drainage.

Outdoors this means the soil should be amended to ensure it is rich in nutrients but loose enough for good drainage. They can grow well in soil with lots of gravel, or even in soil-filled niches in rock walls.

Indoors, string of hearts grows best in a pot with good drainage holes in the bottom. Use a loose, well-draining soil mix, such as a cactus mix. You can also make your own soil mixture. A simple recipe is equal parts of ordinary potting soil, sharp sand, and a gritty amendment that promotes drainage. This last part could be perlite, pumice, pebbles, bark chips, pieces of broken pots, etc.

If you’re thinking about getting a mini monstera, you’ll need to use loose but chunky soil with aerating add ins like orchid mix.

String of hearts grows relatively slowly. You’ll want to repot when it becomes rootbound, but it doesn’t mind a little crowding. You shouldn’t need to repot it more than once every 2-3 years.

When you do need to repot, the best time is in the late spring or in the summer, during the active growing season. This will allow it to rebound more easily from any trauma from the transplanting process.

Here’s a video guide on how to repot string of hearts:

Overwatering is a common cause of problems with the string of hearts, like many succulents. It can cause root rot, as well as bacterial and fungal problems, and puts the plant at greater risk of wooly aphid infestation and other opportunistic pests. Even the famous fairy castle cactus can die from too much water.

While some succulents are tolerant of inconsistent watering, string of hearts is a bit more particular. It prefers not to be drenched, and not to dry out completely. You can use the “soak and dry” method, but make sure to drain it very well.

Ideally, keep the potting mixture wet but not soggy. Allow several inches of soil to dry out before rewatering, but try not to let the pot dry out entirely.

String of hearts needs more water in its growing seasons (spring through fall), and less frequent watering during its winter dormancy (roughly half as often as during the growing season). This could mean roughly every other week in the summer and monthly in winter.

The texture of the mature leaves at the base of the plant should be plump. If they are getting squishy and not as plump, the plant is ready to be watered.

Maintaining proper growing conditions, especially avoiding overwatering, will help you prevent most diseases and pests. Strong indicators of overwatering include leaves turning yellow or falling off, root rot, bacterial or fungal infections, or pests like fungus gnats or aphids.

Underwatering is rarely a problem but is easy to identify based on curling leaves. Keep in mind that, unlike cacti, the string of hearts does not like drying out entirely before rewatering.

Pests that can attack your string of hearts include mealybugs, aphids, and scale.

Mealybugs look like crumbs and tend to live in a white web-like substance inside the nooks and crannies of your succulents. You can kill them with a little isopropyl alcohol on a q-tip or in a spray bottle. Cleaning the plant with lightly soapy water can also help (and will get rid of the sticky residue left on leaves by the mealybugs). You can use the same methods to kill aphids.

Scale insects have shell-like covers. Like mealybugs, they leave a sticky substance on plants (called honeydew), which can lead to black mold growing on the foliage. Scale is best addressed using a combination of soapy water and neem oil.

There are several propagation methods that work for string of hearts.

Planting from seed is an option, whether by direct sowing outdoors or indoors using a grow light. However, the other methods are easier and more common.

Stem cuttings are a good option for propagation. You can propagate stems using either soil or water.

Another common propagation method, perhaps the easiest, is to use the plant’s tubers. Again, there are two options.

No matter how many houseplants you have, there’s always room for a hanging plant to beautify your vertical space. If you like pretty, dainty plants with trailing foliage, the variegated string of hearts is sure to steal your heart.

Emily Cordo is a Master Gardener and DIY remodeling enthusiast. She is co-owner of a small garlic farm in central Indiana, built on the values of permaculture, organics, and biodiversity.